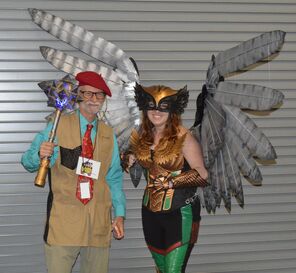 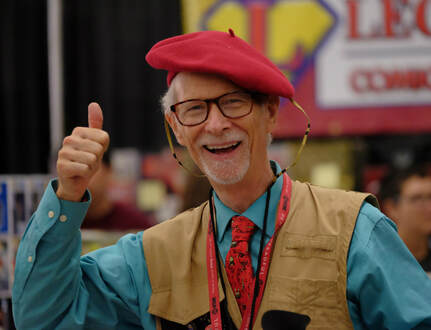 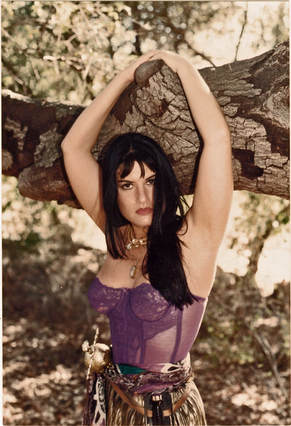 Meet  JENNIFER who is cosplaying one of my characters in an the upcoming novel titled:
THE UNIVERSE OF VOID

What makes this (circa. 1995) photo particularly interesting is that:
1.  Jennifer is cosplaying 'Bandit Babe' when cosplaying was in its infancy.
2. She is being photographed in a natural setting
in San Diego. Photographers have only recently taken their subjects outside of the Cons in order to enhance cosplayer's, uniqueness, variety and appeal.

My booth was listed as PRO-MOTION at the
International  San Diego Comic Con in 1996!
My friends did a Super job by  cosplaying my characters, doing art work, making props, etc.
It has been exciting to see how Cosplay, Comic Conventions, and the whole genre has take hold and is expanding as fast at the Universe.
Join US in the journey! We are looking to watch YOU grow like we have throughout the decades!!
BUT the creation is still in the making in 2019. We are creating miniature scenes, making props and editing the novel, thanks to the advancement of computers. In 1995 computers and computer-savy people were few and far between. 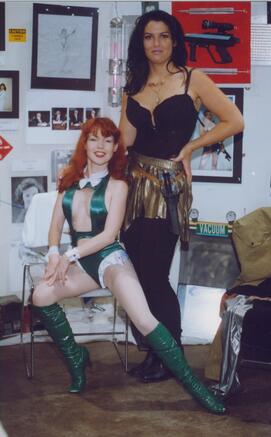 Photo of my Cosplay Character- 'BANDIT BABE'
and an unknown green garbed vixen who graced our booth for a photo.
SAN DIEGO INTERNATIONAL COMIC-CON BOOTH in 1996